Data.shom.fr offers an innovative online platform for the visualisation, exploitation and analyse of the Shom & Météo-France coastal forecasts.
Shom wants to settle a modern national coastal forecast service with dedicated services in order to meet the specific needs of the public marine policies, and also of every single user of the sea (either public or private).

The main objective is to deliver a free and user-friendly service with high resolution coastal forecasts in order to stimulate the private sector that may use them for added-value products, and to encourage the blue growth around operational oceanography in general.

The users of data.shom.fr can access a comprehensive set of coastal forecasts, extracted from French forecast models from Shom and Météo-France: the planning of professional or recreative water-based activities is facilitated.

3 ways of visualizing the forecasts are proposed:

Thanks to web technologies, oceanographic forecasts can be displayed and analysed directly online in an interactive way. Moreover, they can be combined with Shom products in order to help interpreting the results : backdrop maps, high resolution bathymetries, current maps, legal boundaries or areas of interest,...

Discover your forecasts creating your own Oceanograms.

Our use of the Copernicus Marine Service Products 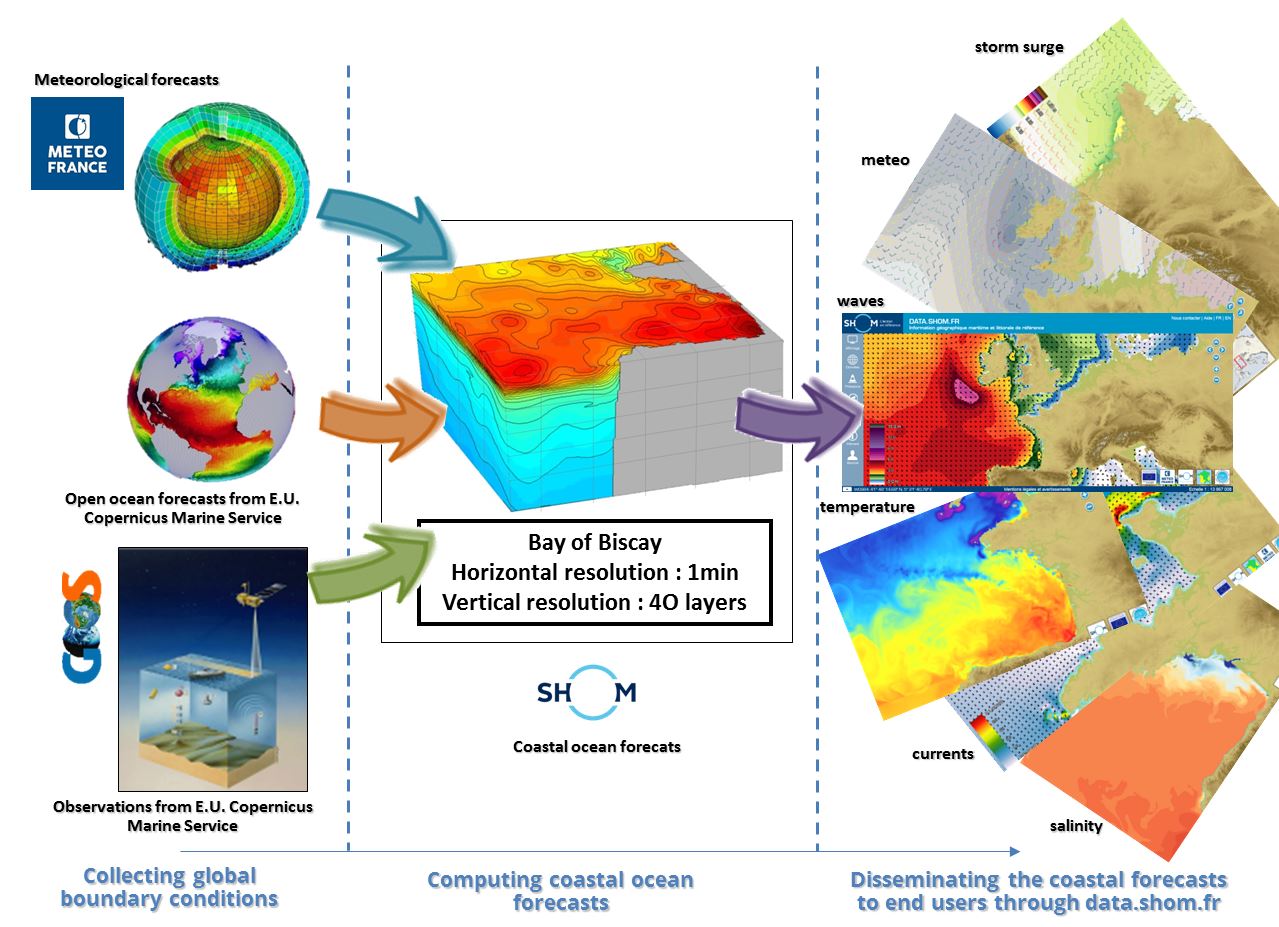 Hydrodynamics parameters (currents, temperature and salinity of seawater) are coming from HYCOM3D coastal models covering Channel, Atlantic and Mediterranean French coasts and operated by Shom on its high performance computer based in Toulouse. The 3D hydrodynamic models need boundary conditions at the different interfaces.

In order to qualify the models results and identify the sources of improvement, it is necessary to be able to compare the forecasts results to the near real time observations or, for long hindcasts, to validated datasets available in delayed mode.
Those observations are from different types (Satellite observations, drifting ARGO profilers, buoys, tide gauges, HF radar for surface current,...) and are produced by many different institutes over Europe (In France : CNES, CLS, Ifremer, CEREMA, Météo-France, Shom,...) which makes their collect considerably complicated for an isolated operator. Thanks to the efforts made by the Copernicus Marine Service, this collect has been simplified by proposing a unique online dataportal which gives access to main observation datasets (Satellite and in situ) at world and regional scales.

For the validation process, Shom uses the following products from the Copernicus Marine Service catalog:

Shom is developing models with data assimilation which use, in addition to the above products, following satellite altimeter products :

Visualizing and downloading the forecasts through data.shom.fr is free and do not need any obligation to create an account. Access to the service is done through any Internet browser.

Please be aware that forecasts delivered on data.shom.fr portal are raw results from numerical models, and have not been reviewed by any weather or ocean forecaster.
As a consequence, the inherent uncertainties related to raw forecast model results have to be taken into account in the use of these products, which is under the sole responsibility of the final user.
In particular, those forecasts do not replace the official meteorological warning services from Météo-France.

Shom's mission, as government operator, is to describe the maritime physical environment and its evolution for the safety of navigation, military operations and the development of maritime and coastal public policies. Since 2007, Shom actively contributes to studies on marine floodings, tsunami waves, climate change,...
In the frame of the datashom service, Shom disseminates everyday up-to-date coastal forecasts on its webportal.

The forecast service relies on a scientific team of about 10 engineers and researchers in oceanography, based in Toulouse and Brest, who are in charge of producing and qualifiying the everyday-forecasts. Those forecasts are also used to give support to the French Navy ships. That is why the major part of the teams are Shom permanent employees who can be temporarily helped during the development phases by researchers supported by scientific or governmental projects

Any question about coastal oceanographic forecasts on data.shom.fr ?